I am reviewing the HP Envy 120 multifunction inkjet printer which is the latest in HP’s “Envy” range of designer slimline multifunction printers. This unit has the same pedigree as the HP Envy 100 printer which I previously reviewed, where it implements a low-profile auto-duplex inkjet print mechanism in a very stylish cabinet reminiscent of home audio and video equipment.

But this model has had a few changes like face-up scanning with a clear glass lid for previewing your originals as well as a swing-open panel for the USB socket and memory card slots. This is alongside the idea of having it finished in an “all-black” housing. 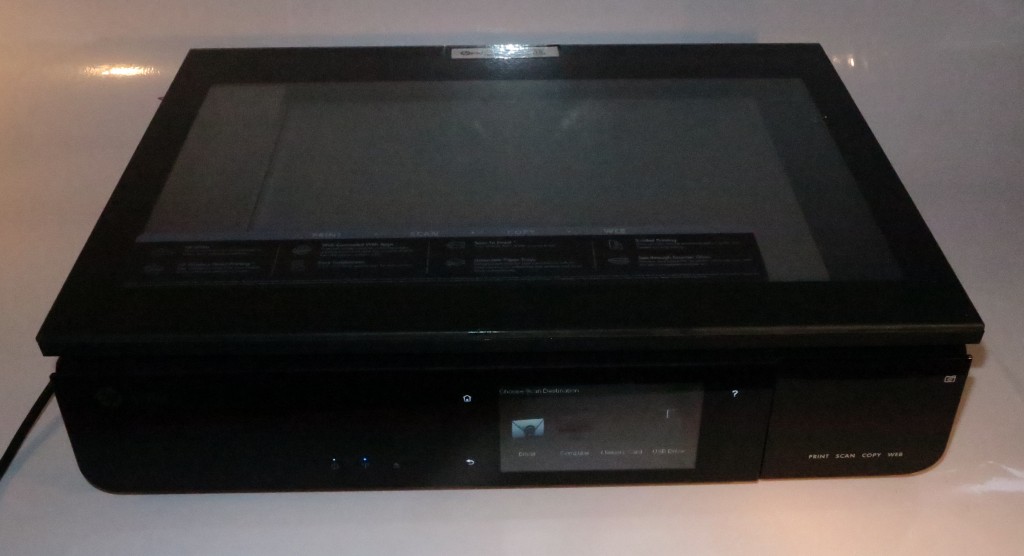 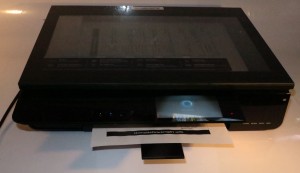 The Envy 120 printer when it is printing

Like the rest of the HP Envy printer series, this model conveys the kind of operation you would expect from high-end audio and video equipment like the classic Bang & Olufsen Beosystem 5000 Series hi-fi systems. For example, when a document is being printed, the front panel swings up and a small bar comes out in anticipation of that printed document. Then, when you collect the document, the front panel swings down.

The printer is able to copy documents placed in the scanner area or print from memory cards or USB memory sticks using the touchscreen control panel. As well, you can use the HP ePrintCenter functionality to print out a wide range of documents ranging from notepaper to newspapers or comics.

It also works with the HP ePrint “email-to-print” function but also has a “scan-to-email” function which is infact an HP ePrintCenter app. This isn’t dependent on the machine knowing a POP3 or IMAP4 email service but through HP’s ePrint service. When you first set this feature up, you would need to enter your email address in to the printer’s control panel whereupon it would send you a PIN number via email. You enter these details in to the printer and can have them stored there. Subsequently, when the printer shows the “sender and recipient” screen, you can touch the “Modify Recipient” button to determine a different recipient. The documents can be sent as a JPEG or single-page PDF. 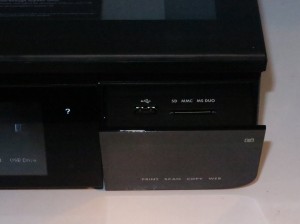 The USB socket that is used for walk-up printing from  and walk-up scanning to USB flash drives and similar devices also has been optimised as a device-charging socket. If you connect a smartphone, external battery pack or similar gadget to this socket, it will supply power to the device in order to charge it or avoid compromising the device’s battery runtime. This even happens when the printer is turned off using the on-off button on the front, This socket, along with the SD card slot that serves the same purpose of walk-up printing and scanning is hidden behind a hinged door on the front of the Envy printer.

The HP Envy 120 works properly with the iOS and Android mobile devices using AirPrint (iOS only) or the HP ePrint app for both platforms. This app can work from JPEGs, PDFs or text files and can allow the printer to print both sides for multipage documents.

I loaded the latest full-function driver software from HP’s Website and this loaded and installed very promptly without issues.

There is a problem that if the PC comes out of “hibernate mode”, it takes a bit too long to discover the printer on the network for scan-to-PC operation and shows up an error message as if the printer wasn’t there. But it can scan to the computer properly.

For printing, the print driver was very responsive and didn’t show any extra unnecessary information through the print process.

The HP Envy 120 was able to turn out documents with a similar quality to other consumer inkjet printers. But when it comes to photos, it can lose a bit of the definition compared to the original Envy 100. Here, it also yields darker images with reduced contrast. Of course, this wouldn’t be a match with the Photosmart printers which yield higher photo quality for HP’s consumer inkjet printers.

When the Envy 120 prints on both sides of a page, there is a slight shift between the front and the back of the page. This can be annoying if you are using this feature for desktop-publishing especially with luggage labels and similar odd-shaped documents. 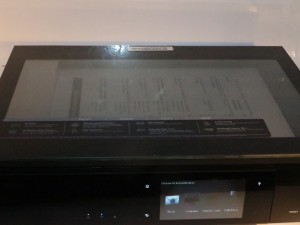 The scanner has the scan head integrated in to the lid so as to provide a “preview” window for how you scan or copy the documents or photos. This can work well for snapshots and single-page documents but can be difficult to use when it comes to working with bound material such as copying out recipes from a cookbook to avoid damaging that cookbook in the kitchen.

One weakness across the HP Envy printers and the slimline printing mechanism is that they use two ink cartridges – one black cartridge and one “three-colour” cartridge. This can make these printers expensive to run especially if you consider regular use out of them because if you run out of one colour in the colour cartridge, you have to replace that cartridge.

Here, HP could improve on the low-profile auto-duplex print mechanism by using separate cartridges for each colour. It can also allow HP to use photo-grade inks that are used with the Photosmart series of inkjet printers, thus giving the Envy series deluxe credentials in the output as well as the looks.

The other weakness with this model is the scanner design not being able to work with bound material very well due to the it working “face-side-up”. This could be improved with a lid that uses a pantograph-style or “Z-style” hinge so it can lie flat on the bound material during scanning thus achieving best results.

Like the HP Envy 100, I would see this printer work more as a secondary printer to keep in a living area where you value elegance and aesthetics. This also would appeal to households who want a multifunction printer but use it on an ad-hoc basis and also value the aesthetics. For example, this could exist in a family room, living room or main hallway while a workhorse printer could be mainly used in the home office for the big runs.

It wouldn’t impress people who place value on the price of the printer or the cost to keep it running especially as a primary workhorse machine.