I am reviewing the Denon DHT-T100 TV pedestal speaker which is one of the new crop of “soundbars” that is intended to serve primarily as an active external speaker for an LCD TV. Here, most of these TVs have internal speakers that are often considered just “good enough” for casual TV viewing but may not give highly-engaging sound quality which some TV shows really benefit from. This situation is underscored by the fact that these sets use a thin chassis which doesn’t really work well as a speaker enclosure and more of these sets have the speakers placed behind the screen rather than behind a separate speaker grille.

This class of device is intended to be positioned as an alternative to a surround-sound home-theatre system with the many speakers, especially where the goal is simply to improve on the TV speakers’ sound.

For example, some of you may find that a stereo system is good enough for your listening area and want to keep that for music playback but you may want to improve your flatscreen TV’s sound.  Similarly, these devices come in to their own with most of us who have always liked positioning the TV in the corner of the room ever since we owned CRT-based TVs, usually to avoid competing with other views like a fireplace or feature window or make it fit in with other furniture.

Controls on edge of speaker

The Denon DHT-T100 is shaped like a plinth which an LCD TV up to 40” rests on using its pedestal. There isn’t the need for a separate subwoofer box because the housing’s size and design is able to serve effectively as two rear-ported bass-reflex speakers. The local controls are arranged across the bevelled top of the front of the unit so as to be accessible but look neat.

This design allows for a piece of equipment that looks neat and hardly noticeable where it is meant to be heard but not noticed visually. 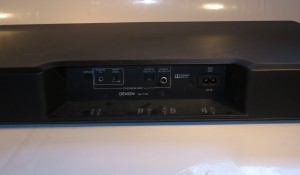 It was a totally simple affair to set the Denon DHT-T100 TV pedestal speaker up, with me just plugging it in to the Samsung TV’s digital output. Then I just had to set the TV up to use the device connected to the digital output as its external speakers and away we went.

This unit is able be be operated with the sound level controls on the TV’s remote control as well as its credit-card-size remote control so you don’t have to think of using another remote control to manage your TV’s sound. This is facilitated with a “learn” mode where you can set it to “capture” the volume and mute commands from that TV remote and act to these commands.

Here, you had to press LEARN then the function you want the device to learn on the Denon’s control surface. Then you press that same function on the TV’s remote control four times so it knows what it is receiving. You have to do this for the “Volume Up” command, the “Volume Down” command and the “Mute” command.

Once I had set the Denon DHT-T100 speaker up to work with the TV’s remote control, it is so easy to use when it comes to adjusting the sound. Here, we were able to adjust the sound and see a bar-graph of lights to know how loud it was playing at. As well, if we used the MUTE button on the TV’s remote typically to stop the commercials shouting at us, the MUTE indicator on the Denon soundbar flashed to indicate this mode.

When you determine the sound mode by pressing the MODE buton, the controls light up in a manner to indicate the effective stereo separation that you will be noticing from the speaker.

In this situation, I was able to avoid the need to use the Denon speaker’s remote control at all this avoiding the need to cause any confusion for people who are not patient with consumer electronics.

I have hooked this up to our Samsung Smart TV and have noticed that the unit came across in a very subtle manner both in the way it looked and the way it sounded. Here, I could hear the sound improvement that it brought to the TV shows that I have watched.

Just after I connected it to the TV and set it up, there was a news bulletin on the ABC and I was able to effectively hear “more” of the news anchor’s voice where there was that bit of extra depth there. Then we watched one of those British “comedy documentaries” and heard the voices and sound effects come through as if they had more “bite”.

Even some of the British crime dramas that I like had come through with a lot more bite from the actors and from the sound effects. For example,  when I  was watching one of the episodes of “The Bill” which opened with a funeral service for a fallen officer. the opening hymn of that service came through in a manner where the organ was given the rich sound that it deserved while the congregation singing the hymn came across very clearly. Another example was an opening scene in another of the crime dramas where a farmer had ambushed someone else with his shotgun and that shotgun blast came across with the “full punch”. I also watched a bit of a highly-produced Hollywood-style movie and the sound still had the full weight.

The Denon DHT-T100 didn’t come across as having a “boomy” or aggressive sound, but I could take it up to 80% without it distorting, clipping or simply sounding “awful”. The Movie Wide effect was able to provide the apparent “increased separation” which came through for both the UK dramas as well as a studio-based game show that the BBC had produced. The key talent for the shows came through as though it was from the TV base speaker’s centre. Here, I could effectively leave it on the “Movie Wide” mode for most of the time to cover all of the TV viewing.

Comments and observations from other people

Other people whom I have watched TV with while the Denon DHT-T100 TV pedestal speaker was in action have not noticed the speaker visually but have noticed the sound improvement that this device has provided over the TV speakers. It is although they haven’t seen this class device in action before I had brought in the Denon speaker.

The Denon DHT-T100 could benefit from a walk-up 3.5mm jack for use in connecting portable devices that don’t use Bluetooth A2DP connectivity.

As well, Denon could use the DHT-T100 as the start of creating a range of these “TV base speakers”. This could be achieved by creating a variant or “better model” that has at least 2 HDMI connections (HDMI output with ARC + 1 or 2 HDMI input) along with the digital inputs. Similarly, they could offer a variant that has an integrated Blu-Ray player for those of us who are replacing a broken DVD player with a nicer Blu-Ray player but also like the idea of improving the flatscreen TV’s sound. A larger variant that suits the 42” or 50” flatscreen TV could come a long way for those of us who own these sets. 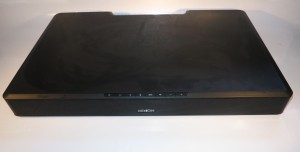 I would recommend the Denon DHT-T100 TV pedestal speaker for those of us who want good sound for their TV watching but don’t want to allow the TV and its related equipment to dominate the lounge area. It doesn’t even take away any functionality that your TV, especially your smart TV, or its associated video peripherals have and you don’t have to learn any new procedures or use different remote controls for adjusting the sound while you have the speaker working still at its best.

This is more important when you are intending to set up improved sound for a TV habitually used by people who may find any changes to operating procedures very difficult.