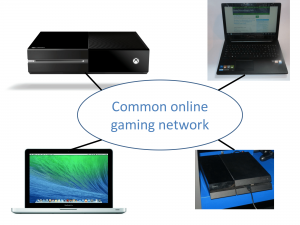 Microsoft wants PS4 and Xbox One to connect online | CNet

Most core games which have any form of multi-machine multiplayer competition, whether online or across a local network, require all games machines involved in the competition to be on the same platform.

That means that a Windows-based regular-computer user couldn’t play against an XBox or a PS4 console. In a lot of cases, the online component of a game was managed via a platform-specific online-competition platform like PlayStation Network or Steam. In the case of consoles, you had to determine which console platform your friends were using and buy a console commensurate to that platform.

Now Microsoft has raised the question of platform-agnostic multi-machine competition by encouraging their game developers to enable this feature. This is because Microsoft effectively is associated with two platforms i.e. the Windows-based regular computer or PC as a games platform and the XBox family of games consoles. But they are inviting Sony, Nintendo, Apple and others to create the necessary cross-platform bridges to allow this kind of play. This includes allowing a player to discover other players to compete with as well as managing the state of play during a game or tournament.

If this worked, it could allow a person to choose whatever console they wanted to play especially if a title is released across multiple platforms. Similarly, this could allow for options like local-network play, whether peer-to-peer or server-based, including local-online hybrid play such as local tournaments or teams. For games developers, they don’t have to decide whether to set up their own online gaming network if they want cross-platform play.

Another issue that could be highlighted here is the ideal user interface for different game genres including the common user interfaces that the platforms use. The article cited the situation where a regular-computer with its keyboard (W-A-S-D keys) and mouse may have the advantage over a gamepad that typically comes with a console when it comes to playing certain games like first-person shooters or strategy games.

This could be used either to open up the idea of games written to be played across multiple platform types and user interfaces, including those that give players an advantage if they play a part of the game on different devices. On the other hand, there could be the feasibility for games consoles to work with mice and keyboards connected via (preferably) Bluetooth or USB.

What Microsoft is doing is to raise the issue of creating platform-agnostic core game play rather than requiring gamers to be tied to a particular platform.

Europeans could compete with Silicon Valley when offering online services