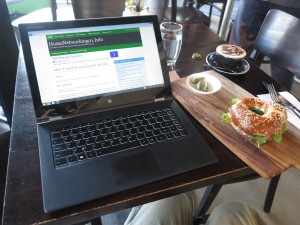 If you find that your computer doesn’t work as it should after an operating-system upgrade, check for newer device drivers from the system’s manufacturer

I had become part of a “men’s shed” community which encourages men to get together and engage in meaningful activities while being a chance for them to open up to each other easily. Here, it became a point where I could “put my skills on the table” and one of the men came to me about an underperforming laptop.

After I had gone through and removed some bloatware and updated the display-card driver on that laptop, the man approached me about this same notebook not connecting to his home network’s Wi-Fi segment since he upgraded it to Windows 10 as part of Microsoft’s free-upgrade program. I had noticed that it could connect to other Wi-Fi networks including the community’s own Wi-Fi network but he mentioned that it wouldn’t list his home network’s ESSID at all.

Subsequently I came around to his home to see the problem for myself and noticed that my Android phone could see the home network’s SSID but not this laptop. I used Windows Device Manager, part of the Windows operating system, to identify what kind of Wi-Fi adaptor was being used in that laptop and had previously researched this problem as something that could be driver-related. 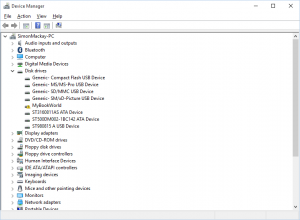 After that, I had hunted down a newer device driver for the Wi-Fi adaptor from the computer manufacturer’s Website and downloaded it to the computer. Then I ran the updated driver’s installation program and, after this update was performed and the computer restarted, Windows 10 properly listed the home network’s Wi-FI ESSID. I selected that SSID then used the WPS “push-to-connect” function to fully connect the laptop to the home network and it worked properly.

I even completed an Internet-connection “acid test” of having the client load a social-network session and check that it reflected the latest activity. By loading a site that is frequently updated with changing information, it avoids the Web browser loading material held in its cache which can be common with a site that doesn’t change frequently which makes me think that the Internet connection is working properly.

If you find that something like your computer’s Wi-Fi functionality misbehaves after an operating system upgrade, identify the kind of device performing the function using Windows Device Manager or a similar tool. Then track down the latest driver software from the computer’s, adaptor’s or chipset’s manufacturer and install that software. Typically this can fix the problem once and for all or make the hardware work better with the operating system.

“Wi-Fi-ready” consumer electronics–what should you know