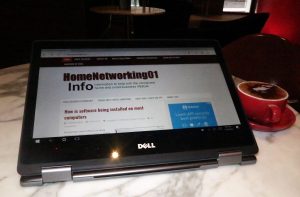 The Windows-10-based 2-in-1 portable computer like the Dell Inspiron 13 7000 Series that I reviewed just lately is appealing as a viable alternative to the iPad or Android tablet. For some users, it may be about a single device that they can use for creating material like writing that memoir; or enjoying content including playing some casual games like Words With Friends or watching online video. The same can also hold true for people who use clamshell laptops, especially the thin-and-light or entry-level variety and want to engage in these activities.

Here, these computers are seen by Microsoft and developers as another “PC-class” device i.e. a regular computer in the same vein as the typical desktop or laptop computer. It is in contrast to how the iPad and Android tablets are seen by their respective operating systems as a distinct mobile device which can be developed for separately.

But there is a lot more casual games, catch-up TV front-ends and other software being developed for these devices

But the mobile platforms have acquired a large range of software behind them that appeals to people who want to consume content. Here, the iOS App Store and the Google Play Store are replete with many respected social-play and casual games along with official native client apps for various media and information services including catch-up TV or video-on-demand services.

As well, most if not all, communications platforms and social networks implement a native client for the mobile platforms with a large percentage running a Windows 10 native client that can work on a regular computer and available through the Microsoft Store.

Let’s not forget that the Microsoft Store is full of the well-known games with different variants providing different user experiences and capability levels for these games, For example, no personal computing platform has ever existed without one or more variants of the common board games like chess or backgammon that you play against a hard-to-beat computer opponent. 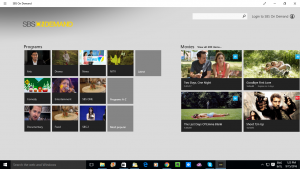 But there are some online media services, games and apps that have been engineered for the touch experience but haven’t been ported to Windows 10 as Universal Windows Platform applications that can run on the 2-in-1 computers. If an app or game is ported to Windows 10, it typically may just be ported to the Mobile variant which means the Windows-10-based mobile phones. This affects some of the popular mobile-platform games like Plants vs Zombies or Piano Tiles, along with the “TV Everywhere” or “catch-up TV” apps that TV broadcasters and pay-TV platforms offer.

Similarly, a lot of the smart-home devices that work on the app-cessory model offer most of these apps only on the iOS App Store or the Google Play Store. Here, I have had to run an article about how to use the Web to set up or manage an Amazon Echo but most of the other devices wouldn’t work further without an app from these stores.

The only other option that people have for playing a favourite casual game or using an online media service is to use Web-based resources such as playing a Web-app version of the game or visiting the service’s Web page. In some cases, the pages aren’t really optimised for a touch-driven user interface like what these computers offer, nor do they take full advantage of what Windows and your 2-in-1 computer has to offer. Similarly, some of these services use Adobe Flash as the preferred advanced user interface rather than HTML5 and this has been highlighted as a security and performance risk.

Time to port those apps to Windows 10 PC

Microsoft is now simplifying the process for porting mobile-platform apps from iOS or Android to the Windows 10 Universal Windows Platform and having them available through the Windows Store thanks to Xamarin or Apache Cordova or various Windows Bridge frameworks. Some of these tools also simplify the process of writing and targeting an app to Windows 10, iOS and Android all at once, something that can work for those of us who are writing an app from scratch with the goal to target those platforms.

The challenge here for developers who have written iPad or other tablet apps would be to port them to Windows 10 and maintain a similar user experience to the iPad package. Then the developers would benefit from making tweaks to the app to exploit the Live Tiles and other Windows 10 user-interface features.

By making sure that the mobile apps and games are available across iOS, Android and Windows 10 UWP including PC users who use the 2-in-1s, it can be feasible for app developers to cover all their bases and reach every platform effectively. In some cases, it could place the likes of the Dell Inspiron 13 7000 2-in-1 as viable personal-computer devices for the family house where Grandma lives.