I am reviewing Dell’s attempt to achieve a popularly-priced large 2-in-1 laptop that can appeal to all users. There is the Del Inspiron 13 5000 variant of this 2-in-1 which omits the USB-C and Intel RealSense camera and is sold for $200 cheaper normally. It is a system that reminds me of the first 13″ Dell Inspiron laptop that I had reviewed where there was a sense of value for money along with the durability in that product.

The model I am reviewing is equipped with the Intel 6th Generation Core processor which is the previous generation CPU. You may be coming across these computers through the sales and may want to see this as a chance to assess the bargain that is being offered. But I have quoted prices for the newer models that have been refreshed with the 7th generation (Kaby Lake) hardware. 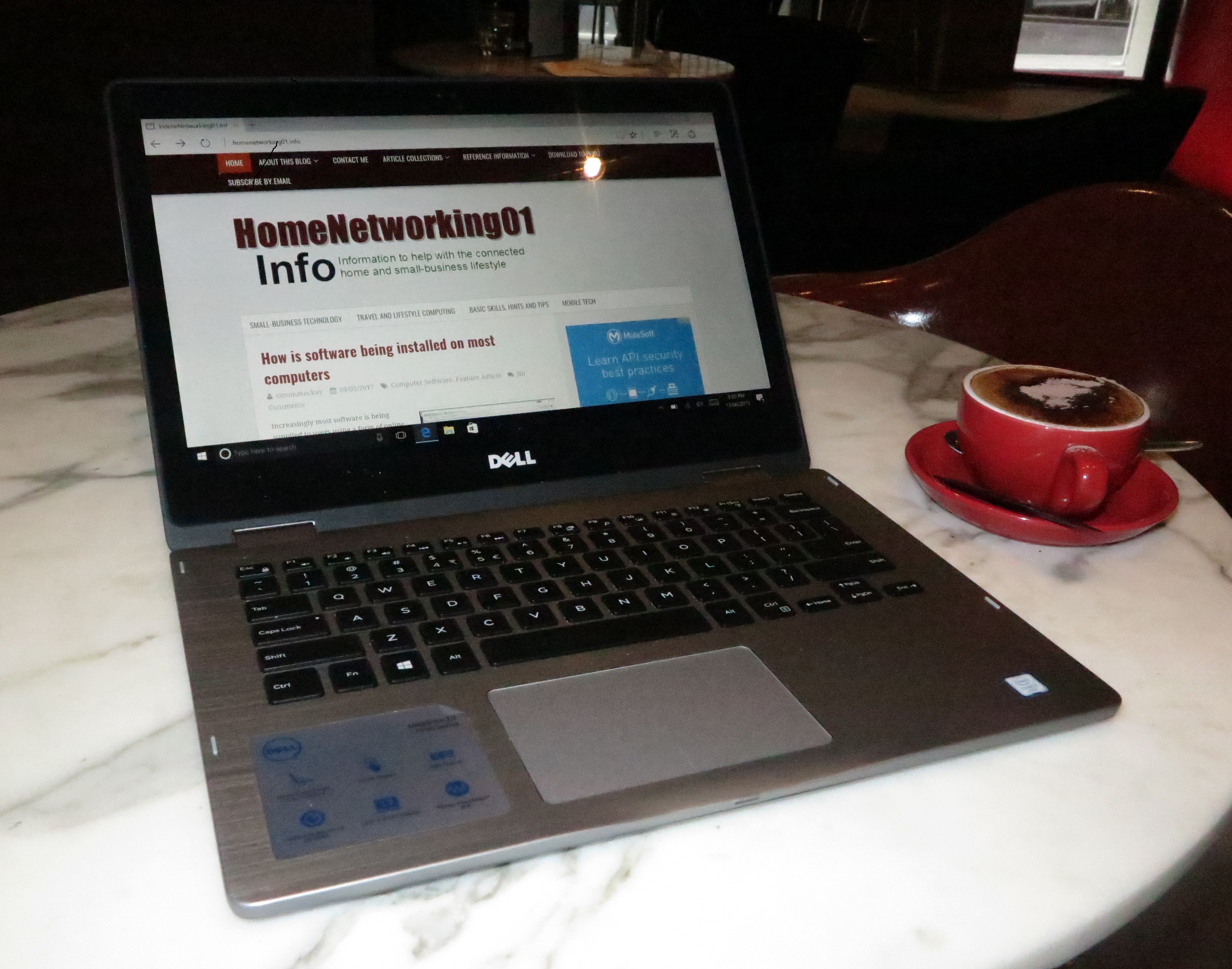 I have found that the Dell Inspiron 13 7000 2-in-1 convertible laptop is well built and uses an aluminium keyboard surround and palmrest that feels cool to the touch.

It has the similar weight to the typical recent-issue 13” mainstream laptop computer thus not being too heavy to carry around. To convert it between a tablet or laptop setup, I have found that it requires the right amount of effort for this process and it works smoothly. The experience would be similar to opening or closing most of the conventional laptops. 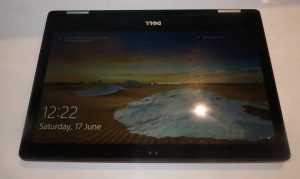 An issue that I keep an eye out for with laptops is how they keep their cool. Here, the Dell Inspiron 13 7000 2-in-1 uses vents located near the hinges to disperse waste heat. Here, it also allows the computer to be comfortable to use in all modes. As well, I had not noticed that there was excessive overheating even with playing video content through the computer. 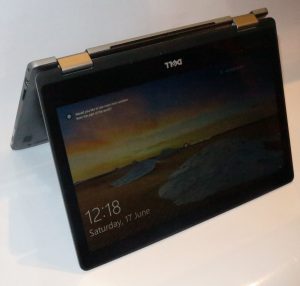 The Dell Inspiron 13 7000 2-in-1’s keyboard is easy to work with even if you are touch-typing. This illuminated keyboard has the right spacing but also has just enough tactile feedback so you can type quickly. But some users may find that they have to have the illuminated keyboard on to make it easy to see the letters.

The multi-touch trackpad works as expected and isn’t prone to being hair-trigger. Let’s not forget that the touchscreen works properly although it is glossy like on other consumer laptops.

The Intel integrated video system even could handle video playback from something like a Facebook home video without underperforming. This was even with the Dell 2-in-1 laptop running on its own batteries and sipping the current.

Although this laptop implements the Waves MaxxAudio sound tuning, the sound quality is very typical of most computers of its size. Here, it would be good enough for personal content viewing but don’t expect much especially if you want good-quality music playback whereupon I would prefer to use it with external sound systems.

The complement of connections on this computer allows for it to be future proof without requiring you to buy extra accessories.

Here, all the variants of the Dell Inspiron 13 2-in-1 have a USB-C socket with Power Delivery both ways, but I would like to see a top-shelf variant of this model offering the Thunderbolt 3 connection rather than the standard USB-C connection. It would then open up the path towards external graphics modules and similar devices as a performance-improvement path. Of course there is the support for connecting monitors using this connection thanks to the DisplayPort alt support the connection has.

This is in addition to a standard HDMI port along with two USB Type-A connections – one being a 3.0 variant for external hard disks and the like and another for larger keyboards and mice. Dell still offers a USB-C expansion module that adds on another HDMI port, a VGA port for that old data projector they continue to use, a Gigabit Ethernet port that can work if your place is wired for Ethernet or with a HomePlug powerline network and a spare USB 3.0 port. This is something I would consider if I was valuing extra connectivity and can be tucked in to your backpack or messenger bag.

The Dell Inspiron 13 2-in-1s offer the right mix of RAM and storage even in their baseline variants. This would be 256Gb for SSD storage and 8Gb RAM which means that you aren’t being starved when it comes to performance and data storage. Here, the SSD on the review sample had lived up to its performance expectations.

For those of you who have digital cameras, the Dell Inspiron 13 2-in-1 comes with an SD card reader so you can easily and quickly download your pictures or footage on to the computer’s storage.

In most situations, the battery was able to last a day of regular computing without the need for me to have the power adaptor connected to the computer.

Most people impressed by the Dell Inspiron 13 2-in-1 as being a representative of the convertible 2-in-1 class of computer.  This is although these computers are not often purchased and once someone buys a touchscreen laptop or a 2-in-1, they will miss these features when they go back to a traditional design.

There are some users, typically those who moved to the Apple environment, who expressed worry about the keyboard on these computers ending up being damaged if the computer is used as a tablet or presentation-viewer setup. It typically represents a staid expectation amongst users when it comes to mobile personal computing where they are comfortable with a traditional clamshell laptop and a mobile-platform tablet.

Personally, I found that if I wanted to browse the Web at a table, I could simply have the computer in the “presentation—viewer” mode so that I am not taking up much room on the table.

I showed the Dell Inspiron 13 7000 2-in-1 computer to a representative from InfoXchange who visited the Melbourne Men’s Shed as part of a digital-literacy survey amongst its members. Here, they were impressed by the touchscreen in the context of older computer users and the use of a tablet as a personal computing device for this user class but liked the idea of the detachable form factor for those who have back issues. She  tried the fold-over aspect but may not have noticed it as offering the same advantage. They appreciated the idea of a keyboard so that these users can also do document-creation work but also liked the idea of the tablet or presentation-viewer modes being suitable for Web browsing or video viewing (think Netflix or catch-up TV).

Subsequently I met up with a new friend of mine who is of an older age group and they were impressed with the Dell Inspiron 13 2-in-1’s form factor including the touchscreen. Here, one of the features that intrigued them was the ability to zoom in to text with their fingers, something that appealed to them as they didn’t have the full vision that we take for granted.

But I would still want to see Dell keep the Inspiron 13 2-in-1 family as a value-priced “Yoga-class” convertible computer with the right mix of features that pitches towards what most people want. Here, they need to focus on a well-built affordable machine that can survive a lot of use but can appeal to most people without being the ultra-cool computer that answers Apple’s products.

Like I have seen with most of the Dell Inspiron laptop computer lineup, I have found that the Dell Inspiron 13 2-in-1 convertible laptops have represented something that offers value for money in its product class.

This is something that is durable but is light enough to carry and is priced in a manner to have you think of it as a main or sole computing device which you can purpose as a large-screen tablet. The RAM and storage capacity offered in the available configurations underscore something that befits this use case whether you choose to run with the package based on the value-priced Intel i5 processor or the one based on the performance Intel i7 variant.

If more of those apps that appear on most iPads could be ported to Windows 10 and made available on the Windows Store, then the 2-in-1s like this Dell could be a viable alternative to the iPad that is kept at home.

VAIO makes a comeback to the US market

Dell issues a security advisory regarding its SupportAssist software