One of the indie games markets out there

Calling all indie developers in the US & Canada: sign up for the Google Play Indie Games Festival in San Francisco | Google Android Developers Blog

An issue that may face a games developer who wants to work the independent path is how they can put the game on the map as far as the public is concerned. For some developers, the importance is about avoiding heading to the “Hollywood of electronic games” where computer games become very similar in quality to the Hollywood blockbuster movies or popular American network and cable TV shows which ends up with the same-old content amid questionable ethics. 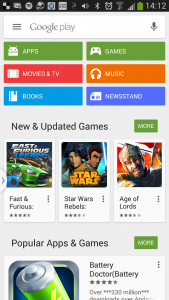 Google Play Store – a step towards the indie game market

One way would be to put the games on one or more platform-specific app stores like the iTunes App Store, Google Play or Microsoft Store. On the other hand, if the game is to be targeted at regular computers, it may be about offering the games to indie-focused software markets like GOG Galaxy or the upcoming Jump subscription-driven market.

The second option appeals to those who want to keep it purely without mainstream influence, as if it is like offering indie-music records through the inner-urban record stores and having it played on community radio stations or by venues visited by the target audience like the cool cafes. It may also include making the games downloadable through the developer’s own Website. But it may only appeal for Windows, Linux or Mac regular-computing platforms rather than mobile devices or consoles and set-top devices.

But Google has taken a process similar to a mainstream full-line music outlet running and promoting an “indie” genre. Here, they are running the “Indie Games Festival” in San Francisco to draw out indie games developers and have them offer the Android platform the best software they can provide. What I see of this is it is a way to stimulate the indie games market especially courting those developers that are writing for mobile platforms.

I even see the Microsoft Store in a better position to court the indie games developer who doesn’t mind going down the second path by encouraging them to develop games for the Windows platform and the XBox One console in a “write-once” approach. Here, they could take a similar approach to Google by running a dedicated festival for indie games developers who want to approach regular-computer and games-console platforms.

At the moment, when it comes to the games for the regular computer, being able to use a dedicated indie-game market or using an established games market like Microsoft Store, iTunes Mac App Store or Steam are the viable games options. But when it comes to targeting other devices like mobile devices, games consoles or set-top devices, the only way would be to use the platform-specific app stores and unless the platform encourages quality independent software development, these will be very limiting for the indie games developer.

There still needs to be interest in and support for the indie games market from many app stores and games markets so that electronic gaming is an environment for high-quality electronic games that appeal to all people.