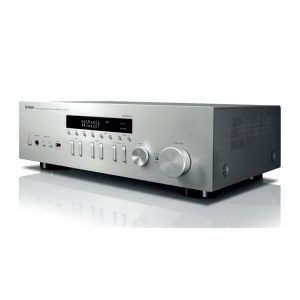 Here I was focusing on people who value the idea of creating a hi-fi system that is about playing music rather than a home-theatre setup that is about showing what Hollywood has to offer. Situations that I think of include creating a formal lounge area where you want to focus your activity on entertaining guests, reading and playing or listening to music; or simply maintaining a separate home-entertainment system optimised for playing music.

Yamaha are still pushing through with stereo receivers that can connect to your home network. The latest examples are underscored with the R-N602, R-N402 and R-N303D Natural Sound Network Receivers which integrate the concept of the stereo receiver with the home network and multiroom audio thanks to the latest iteration of the Yamaha MusicCast network audio technology.

This technology that Yamaha implements in these receivers isn’t interlinked with any overarching multiroom network-audio standard adopted by many manufacturers. But they can also work with network audio sources like DLNA-capable media servers including NAS units, or online sources like Spotify or Pandora. Those of you who use an Apple device running iOS or a recent iteration of MacOS can also use these Yamaha receivers for your device’s audio output.

One of the features I am calling out is the ability to stream audio from a source device connected to these receivers to other Yamaha MusicCast devices. For example, in the case of the R-N602, you could start a record playing on the turntable connected to this receiver in the formal lounge room. Then you use the Yamaha MusicCast Controller app on your iOS or Android smartphone to hear that record through the Yamaha PLUS (WX-030) speaker in the kitchen.

Similarly, these receivers are implementing Bluetooth not just as a source but as an alternate output. For example, one could hear a local radio broadcast on the receiver’s integrated tuner through their Bluetooth headphones without the need to worry about the length of their headphone cord thanks to this functionality.

The Yamaha R-N602 does cater very well for legacy media by providing an integrated phono stage for a turntable equipped with a moving-magnet cartridge, as well as two tape loops which can come in handy if you still record to tapes or other media, including using a computer to archive old recordings. But the Yamaha R-N402 and R-N303D has its analogue inputs being line-level only with one tape loop.

At least Yamaha haven’t forgotten about the network-capable stereo receiver as a product class for devices that serve as a hi-fi system’s hub. Instead, they have made sure that there is a range of equipment that suits different needs and budgets, allowing us to consider how to build out that music system as we want.

The Aereo Supreme Court Test–A repeat of the Betamax case