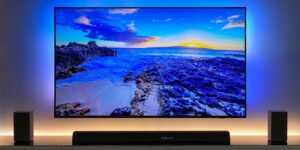 DTS Play-Fi Home Theater setup based around a Philips TV

Google, Apple and Amazon implemented “home-theatre” setups for their set-top-box and smart-speaker platforms. That is where their smart speakers and set-top devices work together in order to provide improved TV sound from audio or video content sources hosted on these set-top boxes. But these are focused primarily about improved stereo separation for the video content’s sound.

Similarly, Denon, Yamaha and Sonos have used their own network-based multiroom audio platforms to support multichannel sound across multiple Wi-Fi-based speakers that work on their platforms. This even extends to 5.1 surround sound with the IP-based packet-driven home network as the backbone between the speakers.

These setups have answered issues associated with the IP-based packet-driven small network that can affect proper in-sync in-phase multichannel sound delivery such as latency affecting one or more channels. Here, it’s been about using a single audio device, typically one the receives the stereo or multichannel audio stream from the source, working as the “reference sync device” for the multichannel audio setup and making sure all speakers refer to that device for the time sync information.

The DTS Play-Fi network-based multiroom audio platform has been supported by a significant number of “names of respect” within the hi-fi world. But lately a few TV manufacturers have come on board to extend this platform towards TV and video use cases including wireless network-based surround sound.

Initially this use case, driven by Philips, applied towards “extending” TV audio towards other logical rooms within a DTS Play-Fi setup. But it is now extended towards DTS Play-Fi surround-sound setups which use this technology and your home network as a backbone between the TV and the speakers that are part of a multichannel surround-sound setup.

This is based around a TV working as a “master device” or “anchor device” with the sound delivered to DTS Play-Fi speakers that serve the front left and right, surround or bass channels of the surround-sound setup. The TV’s own speakers would serve as the centre dialogue speakers and this cluster of speakers is set up as a logical room when it comes to streaming audio around your home network. 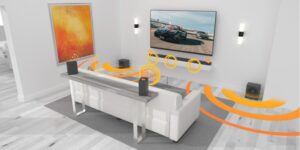 This concept is now extended towards a soundbar serving as a “master device” for these setups, due to the desire to have it work with all TVs rather than those equipped for DTS Play-Fi. In a lot of cases, the soundbar is used as a cost-effective and visually-attractive step towards improving one’s TV sound, with these devices appealing to households that maintain the “TV in the corner” arrangement or prefer a separate stereo system for music.

It is in addition to the “home theatre” application being extended to Dolby Atmos / DTS X setups that implement “height” audio channels. Here, a DTS Play-Fi setup with suitable equipment can be set up to encompass upward-firing speakers or speakers installed up high to create that “sound-above-you” effect but using wireless speakers and your home network.

Again this offers the advantage of wireless surround speakers where you only need power outlets near these speakers to have them work. This still comes in to its own with the open-plan living area with the lounge furniture serving as the room divider – there is very little in the way of cabling to deal with and the surround speakers can be relocated at a moment’s notice.

Similarly, the “sound bar” application could come in to its own with AV receivers where the goal is to move towards a full surround setup but without the ugliness associated with speaker cables run to the back of the room. This is something that some of DTS Play-Fi’s member companies like Onkyo and Pioneer who manufacture AV receivers, could aspire towards especially if they are trying to target some of their products towards the “value” market segment.

Here, some users may use a comprehensive AV receiver for their music playback and home-theatre needs, whether with a stereo amplifier and speakers optimised for music playback handling the front speakers or not. As well, a manufacturer could be offering value-priced AV receivers  that have up to four power amplifiers but support surround sound with DTS Play-Fi speakers.

Lets not forget that Philips could be a brand that pushes DTS Play-Fi towards the territory of affordable equipment and speakers being available from many household names. This could lead to speakers that are priced in a manner similar to IKEA’s SYMFONISK did for the Sonos ecosystem. That is to allow you to build out a network-based multiroom audio system or start a surround-sound setup based on the DTS Play-Fi platform for a reasonable price. It also includes creating one of these setups from scratch using affordable speakers then aspiring to use higher-quality premium speakers in the main living areas of the home while the affordable speakers end up in secondary areas like the bedroom.

The DTS Play-Fi approach to network-based surround sound is demonistrating the use of your home network for full surround sound distribution. As well, this is facilitating the use of a heterogenous setup with speakers from different manufacturers this allowing for the existence of innovative hardware that excels or is affordable for most people.

Laser and LED xerographic printing–what is the difference