Home
Computer Accessories
Audio Accessories
Should I buy a soundbar rather than a surround sound system to improve my TV’s sound?

This article is about considering the idea of purchasing a soundbar or TV base speaker as an alternative to a multiple-speaker surround-sound system as a way of improving your flat-screen TV’s sound quality.

There is a desire to improve the sound quality for most flat-screen TVs because a lot of these sets use a very shallow housing and smaller speakers for their internal sound-reproduction needs. This is compared with CRT-based TVs which implemented a deep housing that wasn’t constrained thus allowing for a better sound flow from the speakers. As well, a lot of recent flat-screen TVs have the speakers behind the screen rather than behind a separate speaker grille and if they are mounted on the wall, they may sound more constrained.

Similarly, there is a desire amongst most TV viewers to hear a sound mix that is authentic to the nature of the content and is more so with people who watch good-quality drama content. For that matter, full-length feature content, especially movies that have been destined for the cinema, benefit from a lot of effort being put in to the sound mix with many highly-trained sound-engineers working the mixing desks in the dubbing stages during the post-production phase.

What are these soundbars and TV base speakers

These are a class of active external speakers made available to improve the sound of an existing flat-screen TV set.

They provide a focused stereo or virtual surround-sound “sound image” for the TV’s position, catering to a wide variety of TV-viewing setups. For example, they cater effectively to the traditional “TV in the corner” position where the TV is positioned in the corner of the living room so as not to contest with the view offered by a fireplace or feature window.

The TV base speaker, like the Denon DHT-T100, is a single-piece solution that is capable of reproducing its own bass. It is housed in a flat box that serves as a plinth for the TV set. Most of these speakers are best for resting a 32”-42” TV on them and can yield a decent sound with some bass depending on the unit. 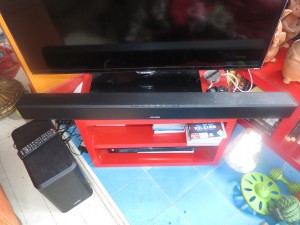 The soundbar, like the Denon DHT-S514, is a two-piece solution that comes as a long “tube” that houses the device’s electronics along with the main stereo speakers alongside a separate subwoofer that reproduces the bass sounds. These are intended to be placed in front of the TV or can be mounted on the wall underneath a wall-mounted TV. If the TV is mounted on an adjustable bracket, it could be feasible to mount the soundbar on that bracket using a single-piece plate.

Where do these stand in relation to the traditional 5.1 surround-sound systems?

A traditional surround sound system has a receiver or centre unit that is capable of working as a music system alongside five speakers and a subwoofer. Two of these speakers have to be positioned behind the viewing area such as behind the couch or armchairs in order to provide the surround-sound effects.

These excel in the channel separation that is required for optimum stereo and surround-sound enjoyment but can be awkward to set up in certain situations. For example, for them to work well with maximum separation, the TV has to be poisitioned in the middle of the room’s wall with the front speakers flanking it. This makes it awkward for those of us who value the traditional “TV in the corner” setup because you may have to place the speakers closer, which may not appeal for music or, if you place them well apart, you will find the stereo balance biased towards where the set is. As well, the multiple speakers can be very aesthetically daunting especially when it comes to positioning them in an open-plan living area where you don’t use a room-divider to separate the living area from the dining area.

Music enthusiasts don’t find that a surround-sound system, especially those sold at a popular price point or from popular outlets, perform well for music reproduction. Typically, they would prefer to listen to music through a separate stereo music system, preferably bought from a boutique hi-fi store, optimised to the task for playing their music. This is underscored with the “back to basics, back to vinyl” movement where it is preferable to listen to music from the traditional vinyl record using a manually-operated turntable that is connected to a dedicated amplifier and speakers.

You would expect the traditional surround-sound systems to work well if you need a single setup to serve the role of all TV/video and music sound reproduction needs.

Where do I see the soundbars or TV base speakers fit in?

I would see these soundbars or TV base speakers fit in to environments where the multiple speakers associated with a traditional surround-sound system and surrounding the living area look out of place like open-plan living areas. Similarly, these devices would earn their keep with people who value the traditional “TV in the corner” layout for their living space, usually to preserve the role of an attraction like a fireplace / woodstove or picture window providing the space’s main focus.

Those of us who value good music and would rather have a hi-fi system optimised for the task of reproducing stereo music while placing less emphasis on movie and TV content would find the soundbar or TV base speaker as an appropriate method to “lift up” that flat-screen TV’s sound.

On the other hand, the traditional surround-sound system would fit in well with people who have the space to locate the many speakers around their living area and can allow the system to serve for both music and video content.

What features do I consider important in these devices

There are certain features that I consider important for a soundbar or TV base speaker setup from my experience with the Denon products I had reviewed. These lead to the most important requirement – a high-quality sound from the soundbar that is easy to operate on a day-to-day basis.

Digital signal path from the TV set to the soundbar

SPDIF (optical and coaxial) and analog input connections on a soundbar

The provision of a digital audio-signal path from the TV to the soundbar is important especially as good-quality soundbars can offer a better digital-analogue converter along with integrated surround-sound decoding to fulfill their job. This can be offered by an HDMI ARC connection or an SPDIF optical or coaxial connection.

An increasing number of these devices will implement a digital-to-the-speaker path where the sound is kept in a digital form with the speakers in the devices connected to digital amplifiers which convert the digital signal to an analogue waveform representing the sound while amplifying it for the speakers. They may implement a digital-crossover setup where separate digital amplifiers serve each speaker driver in the system with digital circuitry passing the appropriate frequencies to the appropriate drivers. 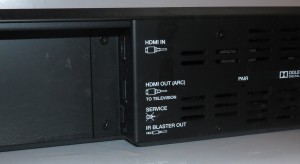 This is liked due to efficiencies that are valued because of smaller amplifier designs that run cool while reducing the number of analogue-digital circuits needed in a product’s design.

Wireless subwoofer connections to be worth their salt

A soundbar that comes with a subwoofer could benefit from a wireless link to that subwoofer in order to allow these setups to be installed in a flexible and aesthetically-pleasing manner without dealing with unsightly wires draping down from the soundbar. 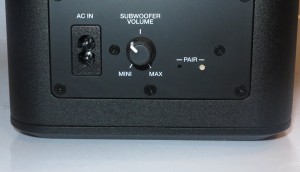 A problem that can easily affect subwoofer setups is that the subwoofer can dominate the sound, not allowing it to be come “authentic” but be so “boomy” that it sounds like the old pub jukebox. When I was setting up the Denon DHT-S514 soundbar, I had to adjust the subwoofer to avoid it sounding too boomy. I wanted to have the sound come across with male voices and some sound-effects like gunshots as carrying some authenticity.

Equipping a soundbar’s subwoofer with a separately-adjustable level control is important to avoid the subwoofer sounding too boomy. Preferably, this could be adjusted at the soundbar or with its remote or the system could also implement a bass-optimisation feature to keep enough bass in the sound mix without letting it dominate no matter the program material or volume level. This is because some content, mainly recent movies that were targeted for the cinema or some American TV series, does have a bass-heavy soundmix where most other TV content doesn’t come across with a bass-heavy soundmix.

A soundbar or TV base speaker should have the ability for you to adjust the volume or mute the sound  during the ads using the TV’s remote control so you don’t have to mess around with another remote control for this purpose. It is important if you connect all your video peripherals to your TV rather than via a soundbar, use a Smart TV or simply use the TV’s integrated tuner to watch broadcast TV,

This could be achieved through the use of HDMI-CEC functionality or the soundbar learning your TV’s remote-control commands for the volume and mute commands while preserving the digital audio link. It could also avoid the need for you to purchase a universal remote control to focus on “one-remote” operation.

A problem that can surface with HDMI-ARC setups is to handle a mix of HDMI-CEC sources and baseline HDMI sources like cable boxes or PVRs. In some situations, the HDMI-ARC connection may not work, thus not allowing you to hear the TV’s integrated sources if you connect a soundbar between your cable box and the TV or you may hear the cable box’s sound through the soundbar when you have the TV off.

The HDMI functionality could allow the source functions associated with the TV to be enumerated as part of the TV’s source list and use the HDMI-ARC path only for sound that emanates from sources integrated in or directly connected to the TV set.

Since most soundbars and TV base speakers implement a “midnight theatre” mode with increased audio compression so you can easily operate them at low levels yet hear the programme content, there could be a distinct visual way to determine whether they are in this mode or not. This is to avoid you turning up the device while watching TV but lose the dynamics that you want/

Increasing a lot of home-theatre receivers are implementing sound-management algorithms like Audyssey or Dolby Volume which optimise the system’s volume or bass level as you watch different programmes or sources. They can, for example, level the volume between the programme material and promotional or advertising material or tame savage-sounding bass to avoid it “creeping” next door in to your neighbour’s apartment or someone’s bedroom while preserving that authenticity in the TV sound.

Personally, I would consider the use of a soundbar or TV base speaker as an option for improving the sound quality that most flat-screen TVs put up. The main circumstances that would have me prefer these devices would be people who value a separate hi-fi for stereo music reproduction or want to position the TV in a more flexible manner like the traditional “TV-in-the-corner” location.