Last year, when Windows 7 and Apple MacOS X “Snow Leopard” came out, a lot more Windows-based laptops and “all-in-one” computers appeared that excelled on their aesthetics as well as their functionality. This has been reinforced with a few of the computers that have come my way for review on this site.

If you, like me, are a regular viewer of “Top Gear” which is a very funny BBC TV car show which is pitched at the petrolheads and car enthusiasts amongst us , you may have seen the “Cool Wall” segment on this show (WikiPedia article). Here, there is a very large board that is divided up in to four segments – “Seriously Uncool”, “Uncool”, “Cool” and “Sub Zero”. Here, the Top Gear Boys (Jeremy Clarkson, Richard Hammond and James May) place photos of various cars on this wall according to how cool they think these cars are. Some of us may have noticed a so-called “Super-Cool Fridge” which was a box shaped like a fridge where pictures of cars deemed to be “Super-Cool” went. The Top Gear Boys tended to vary the definition of “coolness” based on the car’s powertrain, body style or other factors, even on whether certain celebrities and high-profile individuals were driving it or not.

If you thought of a “Cool Wall” existing for laptop computers, it may have looked like this with all of the recent-issue Apple MacBook laptops being considered either “Sub-Zero” or in the “Super-Cool” fridge and all of the Windows-based laptops appearing on the “Uncool” side. This is because of the grey finish with that Apple logo glowing on the back of the computer. What is now happening is that the machines from HP, Dell, Acer, ASUS and Sony are now in a position to fill in most of the “Cool Wall”.

This latest crop of laptops that have been shown in the preview show detailed in the Windows PCs take New York article is now showing that more of these manufacturers are showing up with machines that can look as good as the Apple units. Similarly, there have been people who have used Windows-7-based computers to do creative work including music production and this has led to MacOS X “Snow Leopard” and Windows 7 ending up on an even footing as far as desktop computing is concerned.

Some Apple pundits may think that Apple moving away from the Motorola PowerPC processor platform to the Intel processor platform as well as integration of Microsoft technologies into MacOS X may have denied the Apple Macintosh platform its perceived  exclusivity and superiority over other platforms. This is even though Apple had licensed intellectual property from Microsoft ever since they used the Microsoft BASIC code for the Applesoft BASIC interpreter in the Apple II lineup of computers.

At least there is more activity underway with yielding a functionally and aesthetically level desktop-computing field between the two main players.

UPDATE:  I have had to repost this review because something has happened with the site and the copy for the review has disappeared suddenly

I am reviewing the Dell Inspiron Mini 10 netbook which is the first computer of this class that I am able to review. It would be one of these machines that was considered the right machine to own during the heart of the Great Financial Crisis but still has a place in today’s home network as an auxiliary computer. 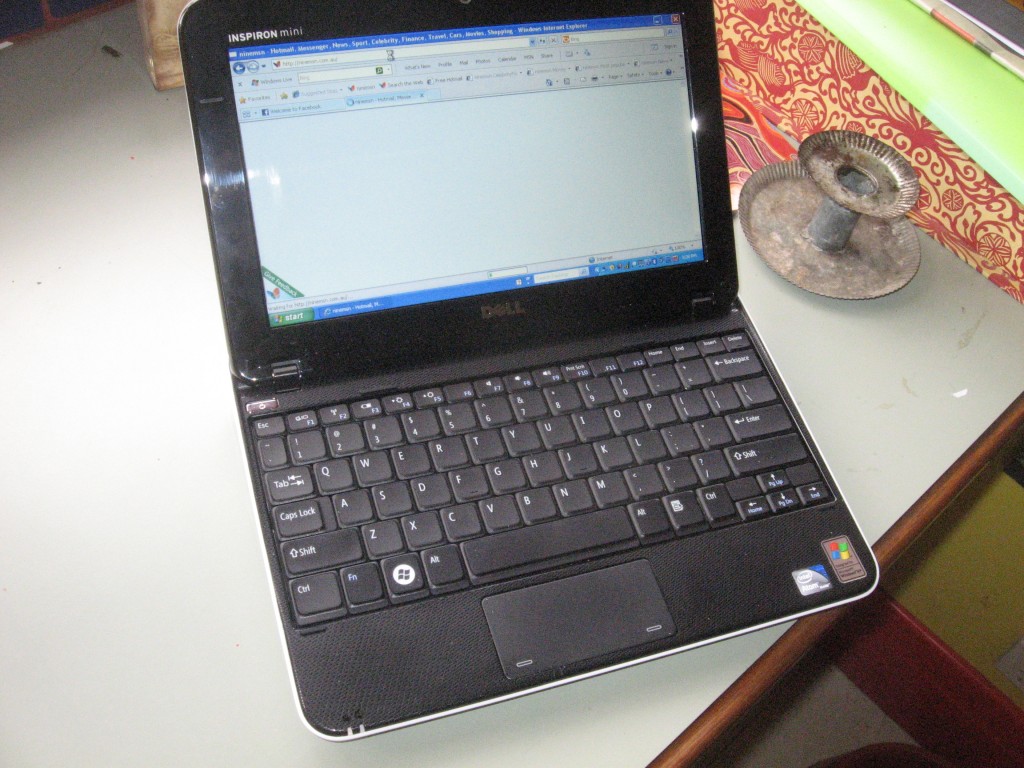 The netbook computer itself

The computer is finished in an “Apple-white” gloss finish on the outside and black around the keyboard and screen escutcheon. The gloss finish may still have the disadvantage of attracting fingermarks during regular use. There isn’t anything that can appear to damage good dining-room tables when the machine is placed on these tables.

My review sample is outfitted with the Intel Atom netbook processor and works with 1Gb of RAM, some of which is shared with the display memory.

The secondary storage is based around a 160Gb hard disk as single logical drive and an SD card slot as removeable storage. The computers that come through the Website will have 250Gb hard-disk space.rather than the 160Gb that is part of the test specification.

The graphics infrastructure is based around an Intel graphics chipset that is optimised for netbooks and yields a 1024×600 resolution on the 10” screen. The only external display connectivity available in this case is a VGA socket.

As well, there are three USB sockets – one on the right-hand side and two on the left-hand side.There is also an Ethernet connection for wired networks and the audio in-out jacks on the right hand side. For wireless connectivity, this unit supports Wi-Fi to 802.11g as well as Bluetooth wireless.

The operating system used in this test specification is the Windows XP Home Edition SP3 but computers that are available for sale come with Windows 7 Starter Edition. It may be still worth upgrading the operating system to Windows 7 Home Premium through an Anytime Upgrade pack if you want better network functionality.

The keyboard is responsive but may appear cramped due to the small size of these computers. The touchpad is very small but works well for navigation. These are situations that are considered typical for computers in its class.

I had watched a few YouTube videos about IT and found that the computer is still good with downloaded video content. As well, I had run it through a round of an action-puzzle game on MiniClip which is a popular casual-game site, and the game was still very responsive. Obviously this wouldn’t be the kind of computer for playing the big-time games but would be good for casual games and similar use.

I haven’t worked out a battery “drain test” yet that is appropriate for computers of this class but as I was working on the computer which was running on batteries, I kept observing the battery meter as I used the computer even while I had McAfee do a virus scan in the background and Windows Update deploy the latest set of updates to XP, the computer doesn’t look like it goes tbattery quickly. I also made these observations with the computer under manufacturer-default conditions.

I would place this computer as a unit that would be useful as a small-size auxiliary computer for travelling or use around the home such in the kitchen or “Facebooking” in front of the TV. It may work well as something with a keyboard for getting notes on to a file while out and about before you “finish” them on your main computer.