I am reviewing the HP Pavilion DM4 Series Beats Edition notebook computer which is a 14” notebook that is intended as a bridge between the ultraportable notebook class of portable computer and the common 15” laptop that most people would work with. This is a consumer-class laptop that has been optimised with the full functionality like dual graphics, “tuned” sound reproduction and high RAM / hard-disk capacity while sing a smaller screen to permit portability. 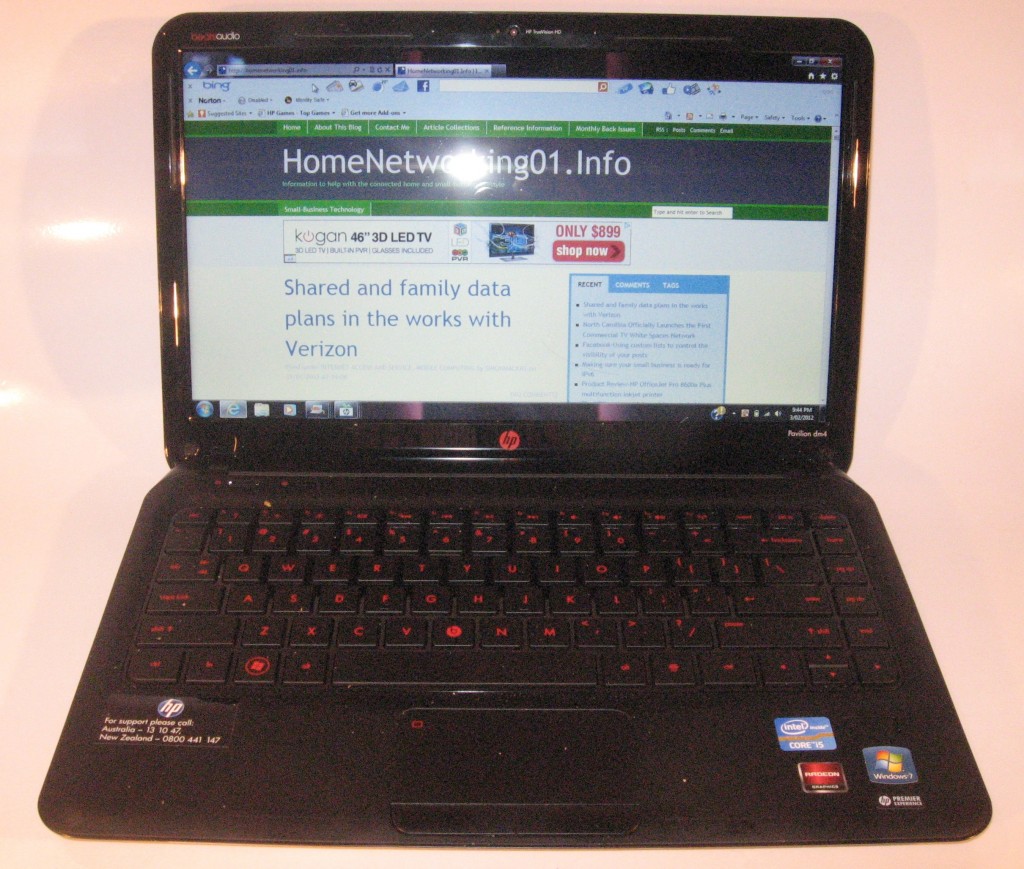 The HP Pavilion dm4 BeatsAudio Edition is finished in an all-black finish with red lettering throughout. The keyboard surround is a rubberised finish while the lid and the rest of the base are finished in a satin-black metallic finish. The display and its surround are, on the other hand, finished in a reflective finish.

It doesn’t feel “tacky” in any way to use and there is a sense of good build quality with this laptop, in a similar way to most consumer laptops that are on the market nowadays.

The keyboard on the HP Pavilion dm4 BeatsAudio Edition notebook has a lot of issues that can affect its useability. For example, the keys are finished in that cheap slippery plastic and are labelled with dull red lettering which can be annoying for most users. This is due to the emphasis on the “BeatsAudio” design and could be improved with illuminated keys. It still works well for touch-typing but the home keys need to be made easier to locate by touch. It is also worth noting that the B key is marked in the form of the “BeatsAudio” logo as another way of highlighting the marketing theme in this computer.

Even the B key is styled like the BeatsAudio logo

The trackpad works as expected and is distinctly identifiable, with distinctly-identifiable selection buttons. This goes against the trend with some laptops where the trackpad is simply an unmarked area with two buttons or a “Macbook-style” large square area with zones for primary and secondary selection.

This is augmented by a one-touch key for opening the Web browser and you have to use the Fn key and the function keys  to operate other functions like on most laptops.

The audio subsystem has been tuned by BeatsAudio, which has been founded by Dr. Dre, one of the US’s major rappers, in a similar vein to how Leo Fender, the name behind the iconic Stratocaster electric guitars founded BBE as an audio-reproduction tuning technology.  This has led to improved bass response and presence in music playback with older and newer pop-music recordings even through the integrated speakers. Here, the sound appears to “come forward” and the notebook’s speakers sound on a par with a midsized portable radio. This isn’t just true for music playback. Speech and sound effects in movies and similar audiovisual work comes forward with the clarity and this can also help when the HP Pavilion dm4 is used as a speakerphone with IP telephony software like Skype.

The graphics subsystem is a dual-mode type with Intel Sandy-Bridge integrated graphics and an AMD Radeon discrete graphics chipset. The graphics operating mode is set according to the application you run on the computer rather than a manually-selected “all-or-nothing” setup. This is so you can have the advanced games and graphics-editing packages engage the “overdrive” offered by the discrete graphics when they are used whereas the computer works in economy mode with integrated graphics when you are working with other applications that don’t depend on the graphics performance like office applications.

The only letdown with this is that the laptop uses a very glossy screen which can be annoying to use in bright lighting conditions. This is especially if you dim the display in order to gain more battery runtime.

The HP dm4 Series has the typical list of connection options expected for a mainstream consumer laptop. This is in the form of 3 USB 2.0 sockets, a Gigabit Ethernet socket as well as VGA and HDMI video-output sockets and a jack for use with headphones or a microphone. It has Bluetooth and 802.11g/n Wi-Fi as its wireless connectivity options. 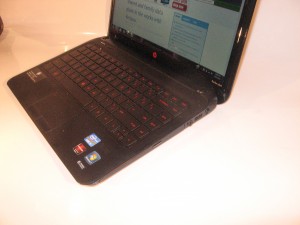 But there are a few connectivity options that I would like to see for this laptop in this day and age. For example, I would like to have one of the USB sockets be a USB 3.0 type or a USB / eSATA combo socket in order to allow one to benefit from high-speed connectivity to direct-connected external storage devices i.e. external hard disks. It could also benefit from either dual-band 802.11a/g/n Wi-Fi connectivity or one of the newer multi-stream 802.11n Wi-Fi network setups for increased reliability and wireless network throughput. But the connectivity set may appeal to most typical household users.

I ran the HP Pavilion dm4 BeatsAudio Edition through the DVD run-down test with a feature-movie DVD and it was able to play on for 4 hours 14 minutes. This is using the integrated graphics but having Wi-Fi and Bluetooth on. There may be a slight reduction in the runtime if Windows Media Player was to use the discrete graphics. Similarly, I was able to engage in mixed activities involving word-processing, Web browsing and, in some cases, YouTube video viewing with this laptop running on battery power.

Other facts about this laptop 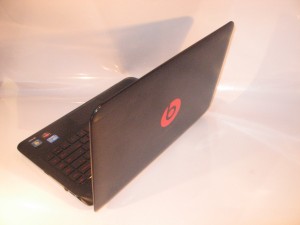 Rear view with the BeatsAudio logo

This laptop also has a “Quick-Web” shell that allows you to head to the Web when you switch it on. This starts by default when you cold-boot it from “Hibernate” mode but you can head to Windows using the “Stand-by” option on this shell.

Limitations And Points Of Improvements

The main limitation that I have noticed with the HP Pavilion dm4 Series BeatsAudio Edition is the way the keyboard is designed. It could be improved through a rubber-feel keyboard with brighter labelling or illuminated keys and the latter option could add “cool factor” to this computer.

The HP Pavilion dm4 Series BeatsAudio Edition notebook exists as a bridge between the 13” ultraportable computers which don’t often have functionality like 500Gb hard disks, dual-mode “overdrive” graphics or extra connectivity and the larger more popular 15” laptops that have the full function set. Here, this could work well for students in senior-secondary or tertiary studies; or simply as a large-screen alternative to computers like the Toshiba Satellite L730 ultraportable.

This also includes users like hotspot surfers or long-distance travellers who are after a portable computer with the ability to be taken from place to place easily such as from cafe to cafe yet have a larger screen and hte functions of the full-size 15″ laptop.