This year and every year, after Thanksgiving has passed and those of you in the US have had that big turkey and apple-pie dinner, the shopping frenzy will be underway. In some cases, the ClickFrenzy heat will become intense around this time while those of you who aren’t in North America will probably see the heat come alive around the beginning of December. This won’t even die after Christmas Day with the hectic Boxing Day sales and specials.

But how do you know what to get when you are thinking of computing and related technology gifts to give your family and friends.

If you are considering a family computer, you could consider the Sony VAIO Tap 20 which I reviewed and its peers like the HP Envy Rove as an alternative to a desktop-replacement laptop or a small “all-in-one” desktop. This is more so for something that may end up being used on the coffee table or kitchen table so that two people can brows over the one Web pave for example.

A “convertible” laptop-tablet computer like the HP x2 series or the Sony VAIO Duo 11 may have an appeal as a tablet or as a small content-creation notebook computer but the size can pre-determine the appeal in either of the roles. For example 13” variants may not appeal as a personal-tablet yet they appeal more as the “portable-typewriter” notebook computer whereas the 11” variants appeal more as the personal-tablet types.

For that matter, we are also seeing an increasing number of laptops and all-in-one computers that have the integrated touchscreen function. This is capitalsing on Windows 8 with its Modern user interface and some of us may see it as taking the touchscreen interface of the smartphone or tablet to the regular computer.

Increasingly other companies like HTC and Sony are offering the 5”-6” “phablet-class” large screen smartphones which can be described as a bridge between a smartphone and a tablet. These are comfortable for those of us who use or have used a “many-function” pocket calculator such as the scientific, statistical or financial calculators. 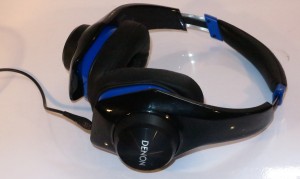 On this same theme of covering the mobile lifestyle, I have reviewed  more headphones like the Denon UrbanRaver AH-D320 headset. This is  alongside Bluetooth speakers like the Sony SRS-BTM8 and the Pure Jongo T6 speakers which can serve most mobile devices adequately wherever you are and they, like other Bluetooth speakers, can work with your laptop computer as a sound-output device.

I have refreshed most of the DLNA Home Media Network articles and have created some articles about linking Dropbox albums to your DLNA Home Media Network using your network-attached storage device. This is based around a Windows, Mac or Linux regular computer and uses basic file-system techniques alongside the use of Dropbox’s native client application. Similarly, I had drawn attention to FreeFileSync as a tool to allow you to use your regular computer’ media-management applications to organise your media and upload it to a NAS for sharing via DLNA.

This is alongside reviewing a few sets of wireless speakers that can connect to your home network and play from an AirPlay or DLNA audio setup as well as being an Internet radio in some cases. As far as buying these wireless speakers are concerned, I would look at what whether you need battery power so they can be used away from AC outlets or whether you need more sound power output say to cover a large listening area.

The multi-function smart TV may make for itself a plausible gift idea so you can have the ability to gain access to most of the online video services. But, on the other hand, a Blu-Ray player, home theatre system or network media player with integrated access to online video services can earn its keep by adding this functionality to an existing TV. This also includes the “big two” games consoles whether they come with the functionality out of the box or available through a software update. For that matter, upgrading to the PS4 or XBox One shouldn’t mean that you get rid of your existing PS3 or XBox 360 because these can also serve as secondary multimedia players for other locations.

A network-attached storage device can become a viable Cbristmas gift for anyone with a home network because these can end up not just as file backup or network-wide “file drop-off” destinations but can evolve to become a media library. As well, if you do upgrade to a higher-capacity NAS, you can spread the network storage load between both devices like purposing one specifically as a media library..

Of course, this article about what to set the “family house” up with may help with choosing the right technology for that location for this location where the whole family visits regularly. This includes even the computer equipment that is to be resident in that location. This is best read alongside my article about whether to run with full broadband at this location.

There are ways to assure that your recipients do get the gifts that are worth it and will see them through the ywars. One way would be for a group to pool resources towards the decent gift, but on the other hand, you could purchase a gift voucher or gift coupon which entitles them to buy goods to the value of that card. In some cases, if the recipient receives many of these cards for the same merchant, they could easily end up purchasing something bigger and better. To the same extent, prepaid payment cards that work with the VISA or MasterCard platform can also serve this same need and also allow them to choose their favourite merchants including the online merchants. These options can make sure that you are buying something that these recipients really want.

I wish you a very merry Christmas and a very happy New Year in 2014,