It is also worth noting that the Brother LC-133 series ink cartridges, which are standard-capacity cartridges for these printers are compatible with most of Brother’s newly-released consumer and small-business inkjet printer range whether as standard cartridges for some models or high-capacity for others. This may allow you to buy and run different Brother inkjet printers from that range yet be able to buy the same lot of cartridges to replenish them which can be a bonus if your supplier does sell them in quantity at a cost-effective price. 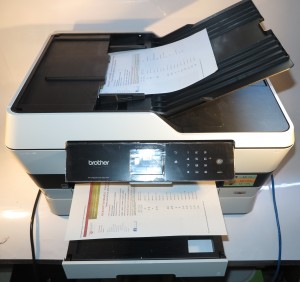 Like most of the recent Brother multifunction printers, the trend is to place the network and USB computer-connectivity sockets within the machine and have the machine open up in a clamshell manner to expose these sockets. But Brother also moved the telephony connections used for regular telephony-based faxing to this same area. This can confuse some users who are installing the printer for the first time or moving the printer to a newer location.

Other than that, this printer worked well when it came to setting it up. But Brother still needs to work on the computer software so it doesn’t time out and throw an error message if it can’t find the printer quickly enough or prefer to use the operating system to discover the hardware.

This printer, like the other Brother A3-capable inkjet multifunction printers uses a paper tray that extends to a large size for A3 or collapses for A4 and smaller paper. As well, you load the ink cartridges in a compartment that is at the front of the machine, moving away from the need to lift heavy lids to replace them. Personally, I would like the printer to identify if multiple new cartridges are being replaced at a time which can come in handy if you were doing a few large printing projects and you needed to replace a lot of cartridges.

I have done quite a few copying jobs such as some family trees for someone who lives with me and this has yielded high-quality copies although it doesn’t print to the absolute edge and can clip the original at the edge. As well, it “copies to memory” so that you can remove the original document before the copies are printed which can come in handy with multiple-copy copy jobs. Even the ID copy function worked properly with you having to keep the card in the same corner when you turn it over.

Like with most of the recent Brother printers, there could be an option for the printer to keep the same settings rather than timeout to default settings. This would make things easier if you were doing larger copy, scan or fax jobs where you have to spend some time organising the original documents to be worked with. Luckily there is the ability to “preset” common setups as shortcuts which can make this workflow quicker and easier.

For that matter, when you copy, fax or scan from the glass platen rather than the automatic document feeder, you have to position the original lengthways. This confused me initially due to using the Brother MFC-J4710DW which was the first to use landscape printing and required the original in “portrait” mode.

The fax functionality works both with the regular telephone, offering Super G3 with a best case of colour A3 or T.37 store-and-forward with monochrome A4 faxing. If the standard was extended, it could support JPEG colour faxing. The T.37 store-and-forward faxing function is available with a free firmware update from Brother’s Web site.

Like other recent Brother inkjet printers, these printers implement the Web Connect functionality which allows them to be used with a lot of hosted services like Dropbox and Facebook. This comes in to its own with the “download-to-print” functionality for photos or PDFs that these services can offer.

The software that Brother supplies with this printer and most of the other printers gives up too easily when it is searching for the device. It could use the host operating system’s hardware-discovery methods to find the printer.

As for printing, it can turn out most jobs quickly but you would have to set the print driver to the “best quality” if you want to turn out “presentation-grade” colour work.

The A3 functionality comes a long way for larger graphics work including most signage but use the “Booklet” printing with A3 and you turn out a double-sided four-page A4 booklet which could save you money or give you a desktop-publishing bonus.

For operation speed, it turns out most most business documents very quickly but takes a slightly longer time to turn out “best-quality” work. Even turning out the A4 booklet on A3 paper came out properly and quickly.

I have printed some test photos and noticed that this printer does work heavier on the yellow and turn out a darker image. There is still a bit of a redder flesh-tone in people’s faces and this may have an impact with turning out best-quality brochures. For a small-business inkjet printer, these don’t beat the previously-reviewed HP OfficeJet 8600a as a high-quality photo/brochure printer.

One area I would like to see improvement take place is with the software where the onus for discovering the printer is placed on Windows rather than the printer’s software.

These Brother printers like the MFC-J6720Dw could implement a straight-through paper path for their automatic document feeders, especially with machines that have the single-pass duplex scanner. This makes them easier to trust with documents that are on fragile paper. Similarly, they could benefit from increased flash memory or a dedicated SDXC card slot for “fax vault” functionality, caching of print queues and similar functionality.

Also a midrange Brother A3 multifunction printer could still implement A4 duplex scanning with A3 one-side scanning as has been achieved with the prior generation of Brother A3 multifunction printers such as tbe Brother MFC-J6910DW that I previously reviewed. This is while a premium model could still support the full-duplex operation for all paper sizes.

Similarly Brother could work on these printers and the rest of their business inkjet printer range to make them answer HP’s OfficeJet Pro 8600 multifunction printer when it comes to printing brochures, flyers and similar marketing collateral. They could achieve this by making the colours more vibrant in most printing modes especially with coated or gloss / matt paper and being able to handle multiple sheets of special-media paper whether in the manual-bypass tray or the paper drawer.

This is due to inkjet printing being material-flexible due to the absence of heat in the printing process. It would be highly relevant with the Brother A3 inkjet printer range because of that paper size appealing to noticeboard or shop-window use or to creation of A4 booklets when the printer is set up to print in “Booklet” mode on A3 paper.

Any of us who handle large documents regularly would find this latest range of Brother’s A3-capable multifunction printers earning their keep. For most of use, the Brother MFC-J6720DW would come in handy especially if we are also using it as the main printer. The MFC-J6520DW costs $20 cheaper but I would consider it a false economy due to having to switch paper when you want to print on a different paper size. The MFC-J6920DW, which costs significantly more, is for those of us who copy or scan a lot of double-sided documents or want the ability to work with Android-based mobile devices in a standalone manner.

You could easily partner one of these printers with Brother’s HL-4150CDN or HL-4570CDW colour laser printers or the cheaper HL-3150CDN or HL-3170CDW for a high-performance colour desktop-publishing setup for your small business or other organisation. This is where you can use the laser printer with laser-capable media for high print runs while you use these inkjet printers for smaller print runs, large A3 documents, double-sided single-sheet A5 flyers or A4 multi-page booklets on A3 paper and similar work.