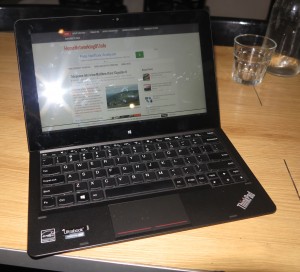 Increasingly a lot of computer systems, especially laptops and tablets, are making use of so-called “recovery” images. This same practice also applies whenever an organisation is using a disk image with the operating system and applications that are the software component of a standard operating environment.

These are a disk image of all of the operating system and supplied applications that are delivered by the system manufacturer or value-added reseller and installed on the system when it is first set up. The computer makes use of these images if the computer has to be taken to “ground zero” due to a virus or corrupt data or before the user hands the computer to someone else. Newer operating systems use these images as part of a system refresh routine in order to remove corrupt data and bring stability to the computer’s configuration.

But what can happen is that as operating system and application developers keep refining their software, what exists on these system recovery images represents software that is way out of date. This reminds me of a support visit where Microsoft Word was continually crashing on a desktop computer and I had discovered that the computer was running an “out-of-the-box” version of Windows Vista which hadn’t had any service packs installed.

Typically, this will lead to reinstalling any and all patches and updates that were rolled out since the recovery image was created. But how can this be resolved?

One way would be for the manufacturer or value-added reseller to create a “recovery image service pack” and deliver that either as a USB stick or through an authenticated download to the computer users. Then the users install this service pack to replace the original recovery image to have an up-to-date reference image. This cond be created at regular intervals such as every six months.

Another way would be to create a dynamic system image that consists of the latest versions of the operating system and application files. The changed files can be added ot that image as part of installing the latest patches. Similarly, an “image update” app could check for newer hardware drivers for the hardware that is integrated with the computer system itself.

These issues may involve determining how installation and recovery disk images are built wiht a view to focus on the images referring ot major versions and editions of the software concerned along with any peripheral drivers. In the latter case, it may be about obtaining hardware-series-specific drivers rather than drivers that focus on that particular piece of hardware.

As well, with operating systems like Windows and OS X being offered with free major-version updates, the recovery image may also be about installing the latest major version of that operating system’s edition.

Apple Snow Leopard – Is it worth it for your existing Mac