When Creative Labs launched the Stage Air desktop soundbar, they were positioning it as a single-piece soundbar to exist on your desktop under your computer monitor. This is in the same vein as those soundbars or TV speaker bases that are connected to larger TV sets to improve their sound. This unit isn’t just a desktop soundbar but able to work as a portable Bluetooth speaker thanks to it having its own battery power.

I then organised to review one of these desktop soundbars to find out how they perform as a desktop computer speaker system or portable Bluetooth speaker and am now reviewing one of these units. 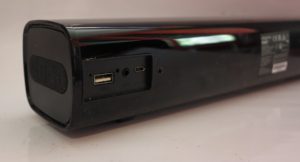 The Creative Stage Air desktop soundbar sits just under my monitor properly and would be able to fit under most of the monitors or all-in-one computers easily. The connections are in a recessed space on the back of the speaker with a 3.5mm stereo jack for your computer, a USB Micro-B power connection and a USB Type-A connection for use with a memory key full of MP3 audio files.

The controls are located on the right-had-side of the speaker with the power / source button located on the right near you. Here, you press this button until the lamp on the front turns green to use the line input connection for your computer sound. 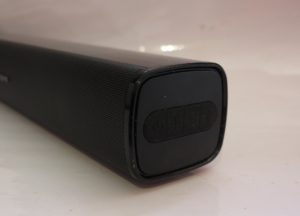 Controls on right side – Power, Up, Down, Bluetooth pairing

To use it as a Bluetooth speaker, you would press this source button until the lamp turns blue. If no device is paired to this unit, the light will flash and the speaker will announce an invitation to put your Bluetooth host device in to pairing mode to complete the setup.

It is easy to tell which input source you are using by the colour of the front light – blue for Bluetooth and green for line-in. As well, the voice prompts for the Bluetooth setup process make it easy for new users to enrol a new device with the Creative Stage Air desktop soundbar.

While I was using the Creative Stage Air desktop soundbar with my smartphone as a Bluetooth speaker, I noticed that it didn’t take long to pair up with the smartphone. As well, there wasn’t any jitter in the sound while I was playing music using the Bluetooth connection.

What really shows up with a speaker system is its sound quality including whether it is too bassy or too brittle in the sound.

Firstly, I had run some audio content from my smartphone and from the computer with it coming across with a tonal quality that has a rich bass sound and a treble sound that is bright enough. It can cope with bass-heavy electronic dance music and yield the appropriate amount of “punch” in that music.

I have played some video content through my desktop PC and have found that the Creative Stage Air desktop soundbar does treat the audio mix properly. This is to assess how a speaker or headphone setup can handle speech, sound effects and music with it affecting its prowess for viewing video content, playing games, engaging in videocalls or similar activities.

The speech comes across clearly with male voices having a deep rich sound. The sound effects come across with some authenticity, something I had noticed while watching an episode Julie Zemiro’s Home Delivery on ABC iView with the sound of the car engine whenever they went anywhere. It is while the music in the video content contains the right balance of clarity and depth. I also watched an episode of a police drama and found that some effects like the gunshots had that bit of punch in them, something that would be of importance when playing a lot of first-person shooter games.

Achieving the right amount of bass response for a small area is facilitated using a passive radiator which is like a speaker driver but not driven by the amplifier circuitry. This was used in some “ghetto-blaster” designs to increase the bass response in a power-efficient manner and is commonly used on many Bluetooth speakers for the same purpose.

As part of testing speaker setups, I take the volume setting up to as high as it will go before I notice any clipping or distortion in the sound. This is to identify how powerful the amplifier circuitry really is and I could take it up all the way without it distorting.

The sound output would really be loud enough for close-up listening at your computer desk or to fill a small area while there is still a rich tone.

The unit can run on its own battery for what would be expected for a portable Bluetooth speaker but if you are using it regularly with a computer, I would have it work with a USB power supply.

One design improvement I would like to see is the implementation of USB Audio as an audio pathway for this device. This is rather than just using the USB Micro-B port for providing power to the speaker. It would then mean that one cable can be used to provide sound and power from the host computer to the speaker rather than using another connection method like Bluetooth or line-level analogue for that purpose.

Similarly, Creative Labs could move towards using USB-C for power and audio connections especially where more computers are being equipped with this connection. It can also lead to them evolving the Stage Air desktop soundbar towards an elementary USB hub function especially where laptops and small-form desktop computers are being equipped with fewer USB connections.

Other alternative connections that can be looked at include the use of an HDMI or DisplayPort input and output connection so that the speaker can be connected between a host computer and a monitor that uses one of these connections and you want to use the “display audio” function that is part of the host’s graphics infrastructure.

The side controls could be made easier to identify by touch so you can know which one is which quickly without looking at them. This could be through raised O, + and – symbols for the power / source and volume buttons or through other means. It is because most of us may he simply used to using the speaker’s volume controls to quickly raise and lower the volume of our computers.

If Creative wants to support playback of file-based audio content from a USB Mass Storage device, they could have the Stage Air also work with other file codecs, especially FLAC and AAC. This is more so as these codecs, especially the FLAC codec, gain traction as higher-quality alternatives to the MP3 audio codec.

As well, if the Stage Air desktop soundbar is to live under that monitor or all-in-one’s screen most of its working life, I would recommend the use of a headphone jack or Bluetooth headphone support. This would avoid the need to swap out the speaker cable for your headphones when you want to connect them to your computer.

I would position the Creative Stage Air desktop soundbar as something that can serve as a portable Bluetooth speaker or as a single-piece alternative to a modest two-piece desktop computer speaker setup. It can also include improving your DAB+ or Internet radio’s sound output, something you may want to do with a small unit that has a headphone connection on it.

But you may find that its sound output is more so for use in the office or at home where you aren’t placing value on a heavy bass response.  The idea that the Stage Air is battery powered may come into its own when you are travelling and want something powerful enough to fill a small room like your average hotel room with music from your laptop, smartphone or a portable audio device. This is while it doesn’t take up much room in your luggage.

On the other hand, if you place value on stronger bass response, most of the three-piece desktop computer speaker setups with a dedicated active subwoofer may answer your needs.