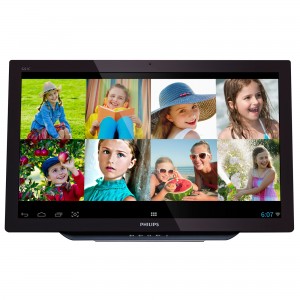 After the Consumer Electronics Show 2014 had passed, it was for sure that Android was to step up to the plate as a desktop operating system and the classes of personal computing equipment were to be blurred. One class of equipment that was being premiered was a monitor that was an Android-driven “all-in-one” computer that that was being showcased running one of the Angry Birds games.

Philips was no further from the truth when they launched a pair of Android-powered Full-HD “smart monitors”. These monitors are able to work as primary or secondary displays for Windows computers but also work in their own right as the equivalent of a recent Android 4.2-powered tablet.

They are available as a 21” (S221C4AFD) or 23” (S231C4AFD) variant with full access to the Google Play store (and such goodies as Instagram, Angry Birds, Candy Crush Saga and the like). Here they run this software using NVIDIA Tegra 1.6GHz horsepower and work with 2Gb RAM and 8Gb flash storage. They also can mount an SDHC card for your digital camera’s photos or other “offloading” storage requirements and connect to your home network using 802.11g/n Wi-Fi.

Some of us could see these as “toys” but they could be purposed not just as secondary monitors for your propped-up laptop. There is the ability to use these as task-focused computers like digital signage / electronic picture frames, kiosks, POS terminals and the like when it comes to work use or they could be used in the same vein as the Sony VAIO Tap 20 and its ilk where they end up on that ottoman so that two kids play air-hockey or similar multiplayer games.

At the moment. they are being sold in Europe for €440 (21” model) or €470 (23” model). This is a symptom of what will be happening with Windows and Android being the mainstream operating systems for both regular and mobile computing needs.

Investing in an external graphics module for your laptop